Since I was a teenager, I've been interested in cryptography.  I've also been interested in business and finance, and started my first business selling computer accessories in high school.  Bitcoin, as a crypto-currency, is something that certainly intrigues me.  Recently I decided to do some research on bitcoin mining.  It would seem there may still be opportunities for individuals to make money mining bitcoins. 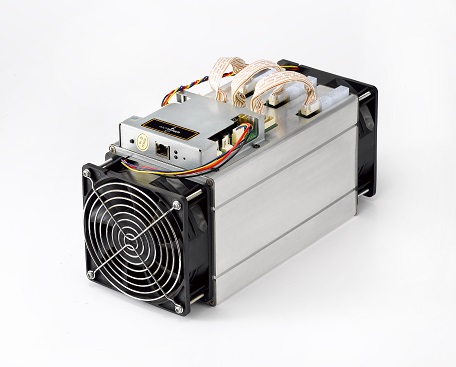 The image above is of a Antminer S7, which today (Dec 25) sells for 2.91BTC.  One bitcoin is trading for about US$455, making the price of the miner about US$1325.  If you are willing to wait for the Jan 20th production batch, the price drops to 2.4BTC.  The only other bitcoin miner on the market at this time is the Avalon 6, which sells for 3.2BTC.  Rated at 3.65 trillion hashes per second (TH/s), the Avalon is much less powerful than the Antminer at 4.73 TH/s.

So can you make money with bitcoin mining hardware?  Probably, but it depends on where you live, or more specifically, what you pay for electricity.  It also depends on fluctuations in the bitcoin market including the price of bitcoin.  I'll explain my guess on where the market will go, and do the math on whether buying a S7 would be profitable where I live in Eastern Canada.

The first thing to work out is the landed cost of the S7.  Allowing about $50 for shipping and adding local taxes that would be due on import brings the cost up to $1575.  Adding three 500W power supplies (cheaper than a single 1500W supply) brings the total to $1725.  From there I could create a complex spreadsheet to calculate predicted mining difficulty increases and power costs, but it is a lot easier to use an online mining mining calculator.

The first field in the form is the difficulty increment, which I'll leave to the end as it is a bit complicated.  While the average cost of electricity in North America is close to 10c/kWh, where I live it is about 12c US, so 0.12 goes in the electricity price box.  I think the Antpool fees are less than 2%, but I left in the default 2% just to be safe.  The hash rate for the S7 is 4730 GH/s, and my previously-calculated hardware price was $1725.  Power consumption is around 1250W.  I expect it would take about a week from the time payment is made until the S7 would be up and running, so I put in 7 days for the start date.

Now for that complicated difficulty increment.  Although the form defaults to 20%, that is much higher than the average over the past year.  .To estimate the expected difficulty increase with a constant price, I looked at mid-February and mid-October 2015, when the price was about US$250/BTC.  The difficulty increase during that time was 30%, and averaged over the 17 difficulty adjustment intervals, that works out to 1.56%.  I rounded that up to 2%, in case the increase in difficulty in the future is slightly faster.  Based on those numbers, the S7 would start generating a profit in November of 2016.

Another complication to estimating mining profitability is the block reward halving that will likely happen by July 2016.  At that time the reward for mining will drop from 25BTC per block to 12.5BTC per block.  I suspect that will impact the economics of mining so that it would take about a year to start generating a profit instead of  about 10 months.

My conclusion from all this: If you bought yourself a bitcoin miner for Christmas, I think the odds are better than 50/50 that you'll make money on your investmentbet within 2 years.  Personally, I'd put my money in a low-risk investment that is likely to return 5-7%, or at least wait and see if the economics of bitcoin mining significantly changes.

I suspect two reasons for the change.  The BM1385 chips (pdf datasheet) were not always stable running at 600Mhz, so Bitmain changed the default to 575Mhz on batch 2 and batch 4 (for 4.66 TH/s).  Running at a higher voltage allows the chips to run at a higher clock rate.  The second reason is probably cost reduction; they now can produce 20% more S7s than before for a given number of ASICs.  For the short term I think that is a good idea since the S7 is still the most power-efficient miner available.  Before more power-efficient equipment using 16nm mining ASICs starts shipping, it may make sense for Bitmain to make another version of the S7 with 4 chains of 20 chips per board running at 0.6V and 400Mhz.  The power consumption would be about 1000W for 4.8TH/s (208W/TH), and they would be more reliable running at lower voltages and cooler temperatures.

Posted by Ralph Doncaster at 2:53 PM