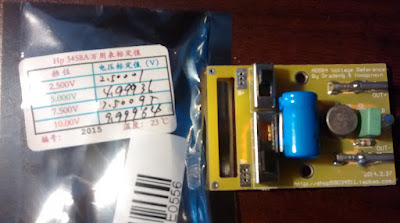 After buying a couple cheap REF5050s that turned out to be no good, I decided to buy a $6 AD584KH voltage reference.  A new AD584 costs about $20, so getting a whole module for $6 may seem like a scam at first.  However a close look at the photos from the vendor, and the photo of the one I received reveal that the AD584KH used on these modules is not new.  The one I received has a date code of 9703, so these are used parts, likely de-soldered from old equipment.  For voltage references, used parts are usually better than new, because their stability improves after they are aged for 250-1000 hours.  References that are hermetically sealed in a metal can like the AD584 are even more stable than the REF5050 since changes in humidity do not reach the IC.  As can be seen from the calibration sticker on the anti-static bag, the output voltages were measured with a 6-digit bench meter.

The reference was useful for testing and calibrating my 2 auto-ranging meters.  I adjusted my old meter so that it now reads about 0.025% high on the 0-4V range.  My new meter doesn't have any calibration pots, but I was able to determine that it reads about 0.11% low on the 0-6V range.  I've also concluded that my Wing Shing TL431A parts are 2.5V, not 2.495.  This is not too surprising, as many other 431 parts are 2.5V, like the LT1431 and the CJ431.  I also checked a cheap 3-digit voltage meter, and found it was reading low by about 0.5%; not bad considering it costs not much more than a dollar.

Spending $6 to check a $25 meter is probably not something most people will do.  Although I don't need to be able to measure voltages down to the nearest millivolt, the perfectionist in me likes that kind of precision.  And with only occasional use, it is likely to maintain better than 0.01% (100ppm) accuracy for decades to come.

Posted by Ralph Doncaster at 2:18 PM