USB-TTL modules using the PL-2303HX chip are the cheapest ones around ($1.40 from Fasttech).  The chip has a built-in 3.3v regulator, so the modules can supply both 5v and 3.3v power.  Drivers for them are included in the Linux kernel and in Mac OSX too. 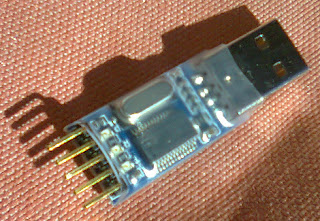 Apparently the chip has been cloned, and as a result Prolific updated their Windows drivers to detect the clone chips and fail.  If you are getting "Error Code 10", the module will work with earlier versions of the driver.

Besides its intended use, I have used it as a breadboard 3.3 & 5v power supply with a USB extension cable to a 5v USB power supply (or a computer USB port).

I also find the adapters handy as a simple voltage tester.  The T and R LEDs light up when pulled to ground, so I'll attach them to MCU pins to check for pulses.
Posted by Ralph Doncaster at 2:21 PM 3 comments: 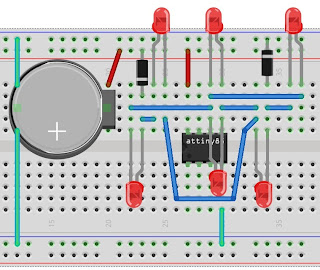