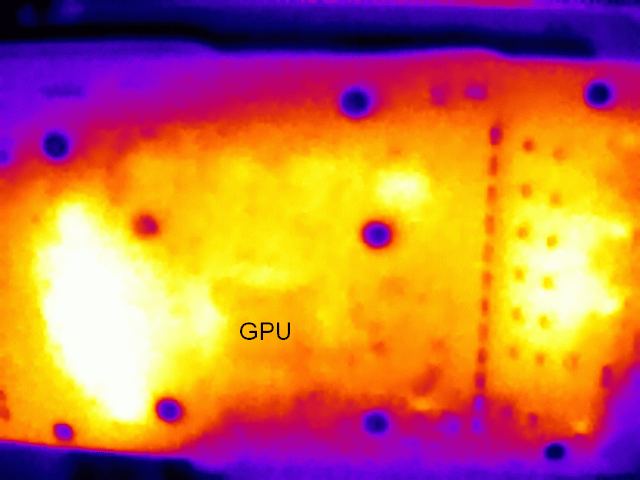 The image was taken of a 4GB MSI R9 380 card with the memory clocked at 1600Mhz while running ethminer-nr.  The memory chips above the GPU are connected to the heatsink through a thermal pad, but the chips to the left of the GPU are not.  Using an infrared thermometer I measured temperatures between 95 and 100C on the back side of the PCB from the RAM, so the RAM die temperatures are likely well in excess of 100C.

Keeping RAM cool can make a material difference in the clock speeds that can be achieved.  Instead of 1600Mhz, I have found that 1500Mhz-rated GDDR5 can reach stable speeds of 1700Mhz when connected to a basic heat spreader.  The brand of the memory, Elpida, Hynix, or Samsung, makes little difference in performance when compared to cooling.

While manufacturers will rarely provide enough detail in their specifications or product images to determine if the RAM is cooled, card tear-down reviews will often show the connection between the heatsink and RAM.  Of the cards I have used, only a MSI R9 380 Gaming card had all the RAM cooled.  Neither MSI Armor2X cards nor Gigabyte Windforce cards have all the RAM chips cooled with a heatsink or heat spreader.  I also own an Asus Rx 470 Strix card, and that also lacks active cooling for some of the memory chips.

Posted by Ralph Doncaster at 3:47 PM No comments: