Over the past years, one of my most popular blog posts has been a soft UART for AVR MCUs.  I've seen variations of my soft UART code used in other projects.  When MicroCore recently integrated a modified version of my old bit-bang UART code, it got me thinking about how I could improve it.

There were a few limitations to my earlier UART code.  One was that it didn't support baud rates below 19.2kbps at 8Mhz or baud rates below 38.4kbps at 16Mhz.  It was also problematic for people that tried to integrate it into C/C++ libraries, as the code was written in AVR assembler.  Another problem that was recently brought to my attention by James Sleeman, was that the UART receive didn't work well at moderately high baud rates such as 57.6kbps.  Since my AVR skills had improved over time, I was confident I could make tangible improvements to the code I wrote in 2014. 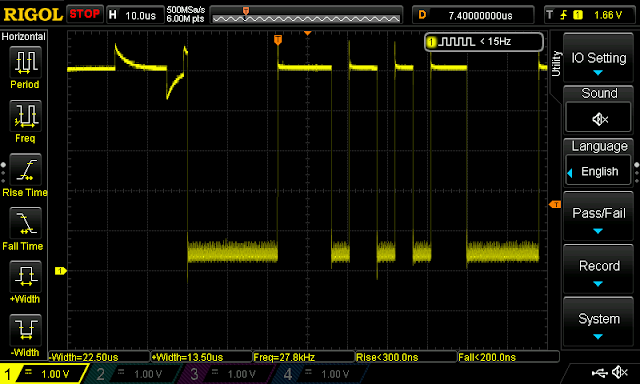 The screen shot above is from picoUART running on an ATtiny13, at a baud rate of 230.4kbps.  The new UART has several improvements over my old code.  To understand the improvements, it helps to understand how an asynchronous serial TTL UART works first.

Most embedded systems use 81N communication, which means 8 data bits, 1 stop bit, and no parity.  Each frame begins with a low start bit, so the total frame is 1 start bit + 8 data bits + 1 stop bit for a total of 10 bits.  Frames can be sent back-to-back with no idle time between them.  The data is sent at a fixed baud rate, and when either the receiver or transmitter varies from the chosen baud rate, errors can occur.

When it comes to the timing error tolerance of asynchronous serial communications, I've often read that somewhere between 2% and 3.5% timing error is acceptable.  I've also read many "experts" claim that a micro-controller needs an accurate external crystal oscillator in order to avoid UART timing errors.  The truth is that UART timing can be off by a total of over 5% without encountering errors.  By total, I mean the sum of the errors for both ends, so if a transmitter is 2% fast, and the receiver is 2% slow, the 81N data frames can still be received error-free.  The timing on a USB-TTL UART adapter is usually accurate to within 0.1%, so if I am sending data from an AVR that is running 3% slow, my PL2303HX adapter still receives it error-free.

The transmit timing of my earlier soft UART implementations is accurate to within 3 clock cycles.  This was each iteration of the delay loop takes 3 clock cycles - one for decrement and two for the branch:
brne TxDelay

And since delayArg is an 8-bit register, the maximum delay added to the transmission of each bit is 2^8 * 3 = 768 cycles.  On a MCU running at 8Mhz, that limited the lowest baud rate to around 8000/768 or 10.4kbps.  To allow for lower bit rates, picoUART needed to support longer delays.  I also wanted to support more accurate timing, so picoUART uses __builtin_avr_delay_cycles during the transmission of each bit.  The exact number of cycles to wait is calculated by some inline functions, which is a better way of doing the calculations than the macros I had used before.  Writing picoUART in C made the timing calculations more difficult, since compiler has some flexibility in how the code is compiled to AVR machine instructions.  In order to get avr-gcc to generate the exact sequence of instructions that I wanted, I had to use one inline asm statement.  When I used a C "while" loop instead of the asm goto "brne" instruction, the loop was one cycle longer due to a superfluous compare instruction.  Future versions of the compiler may have improved optimization and omit the compare, which would slightly impact the timing.

As with the transmit code, picoUART's receive code is accurate to within one cycle.  Unlike my earlier UART code, picoUART returns after reading the 8th bit instead of waiting for the stop bit.  Because of this change, picoUART begins by waiting for the line to be high before waiting for the start bit.  Without the initial wait for high, back-to-back calls to purx() could lead an error when the 8th bit of one frame is 0(low) and gets interpreted as the start bit of the next frame.  This change approximately triples the amount of time for the AVR to process each byte in a continuous stream of data.

My earlier UART code had two incompatible versions.  One version used open-drain communication, where the transmit line is pulled high by an external resistor, and pulled low by the AVR.  This version supported using a single wire for both receive and transmit.  While it also worked with separate pins, some users found it inconvenient to add the pull-up resistor.  Instead they would choose the "push-pull" version, where the AVR drives the line high and pulls it low.  With picoUART a single version works for both use cases, because it works in "push-pull" mode only during transmit.  When not actively transmitting, the IO pin is set to input mode with the internal pull-up activated.

I've tried to help both the noobs and experienced AVR developers.  The noob can download a release zip file to add as an Arduino library.  If you are an old AVR developer like me that prefers a keyboard over a mouse, you'll find a basic Makefile with the echo example.  The default baud rate is 115.2kbps, although it is capable of accurate timing at much higher speeds such as 1mbps for an AVR running at 8Mhz.  The default transmit is on PB0, with PB1 for receive.  The defaults can be changed in pu_config.h, or with build flags like "-DPU_BAUD_RATE=230400L".