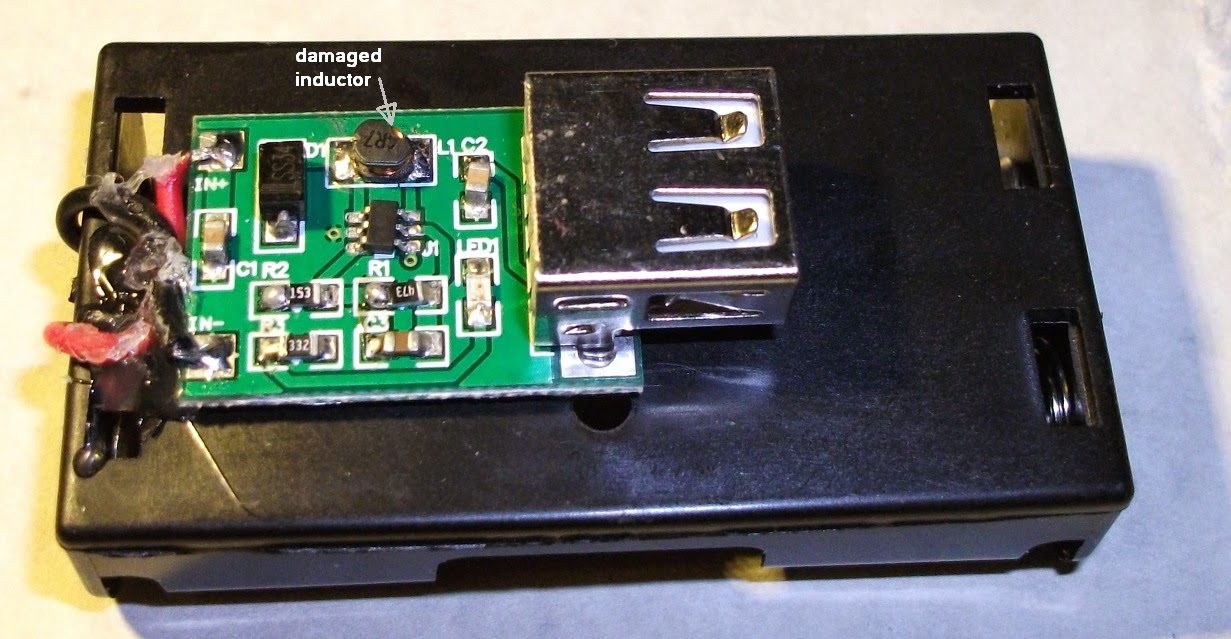 The modules were advertised as "input voltage: 1-5V" and "Output Current: Rated 1A-1.5A (single lithium input)".  I put in 2 NiMh cells, and the read LED on the boost module lit up.  The input from the batteries was 2.6V and the output voltage with no load was 5.08V.  I measured the current at between 2 and 3 mA.  If the modules output 1-1.5A with a 3.7V lithium battery for input, then I calculated they should output at least 600mA with 2.4V in from a couple of NiMh AA cells.  Other vendors advertise specs of the same modules as, "output current of 500 ~ 600MA with two AA batteries", so my 600mA calculation seems about right.

I started load testing with a 68Ohm resistor, and the output was 5.12V for an output current of 75mA.  With a 34Ohm load the output voltage was 4.89V.  The USB voltage is supposed to be 5V +- .25V, so getting 600mA output without the voltage dropping below 4.75V was looking unlikely.  For the next load test I used an old 15W car speaker with a DC resistance of 13Ohms.  With the speaker connected the voltage was only 4.48V, giving an output current of 345mA.  At this load, the output voltage from the batteries was 2.4V.  Interpolating between the results indicates the modules would output not much more than 200mA before dropping below 4.75V.

The last thing I tried was charging a phone.  When I plugged in my wife's iPhone, nothing happened.  In order to be identified as a USB charging port, the D+ and D- pins need to be shorted, or for a high-power (over 500mA) charging port they need to have a voltage divider from the 5V power.  I checked the pins with a meter, and they were not connected.  I then soldered a small jumper to short D+ and D-, and tried plugging in my wife's iPhone again.  This time the screen indicated the phone was charging.

Since the modules did not perform as advertised, I messaged the AliExpress seller XM Electronic trade/Allen Lau with the details of my testing, and requested a partial refund.  After four days he did not respond so I opened a dispute with AliExpress.  Within 12 hours, he rejected the dispute only stating, "There was no evidence of right".  In the past I've encountered sellers on AliExpress that have even given full refunds after learning their products don't perform as advertised.  With Allen Lau it's the first time I've encountered this kind of "I don't give a shit" attitude.

Although the modules do not perform as advertised, they are good for a 5V power source up to about 250mA.  You can also find boost converters with a beefier 47uF inductor, but from testing results I've read online they're not much better; with 2.4V in, the output voltage of the bigger modules drops below 2.75V at around 300mA.  For backup power for a mobile phone, one of the mobile power banks using a lithium 18650 cell may be a better idea.

If you're just looking to boost the voltage from a battery for a MCU project, check out Sprites mods.

Posted by Ralph Doncaster at 4:04 PM