The 74595 and 74164 serial-in parallel-out shift registers are a popular way of adding extra outputs to a MCU.  There's lots of good guides online about how to use these shift registers such as this one by Ido Gendel.  I recently found a great deal on a bunch 74595s, and wondered if there is an easy way to modify circuits intended for a '164 to use the '595.  The solution turned out to be as simple as connecting two pins with a resistor. 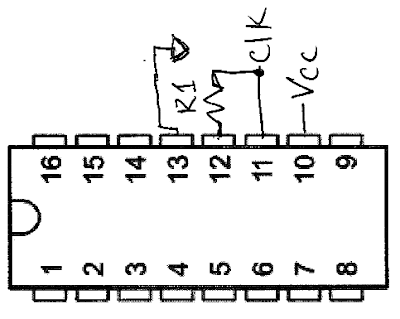 There's actually a bit more than just connecting two pins together with a resistor, but the other requirements are simple and obvious.  Pin 13 on the '595 is Output Enable, and is active low, so it should be tied to ground.  Pin 10 is the clear pin (like MR on the '164), and should be tied high to keep the shift register from clearing.  As a small aside, when doing this on a breadboard you may want to connect pin 10 to Vcc with a 1K resistor.  That way if you accidentally connect to pin 9 (Qh') instead of pin 10 you won't risk shorting out the chip and damaging it.  I got my batch of '595s for about 2c ea, so I'm not concerned about frying one of them.  The key part of this solution is the resistor between pin 11 (SRCLK) and 12 (RCLK).  RCLK is what updates the 8 outputs, and it needs to be clocked high at least 19ns after SRCLK (Ti datasheet table 7.6). 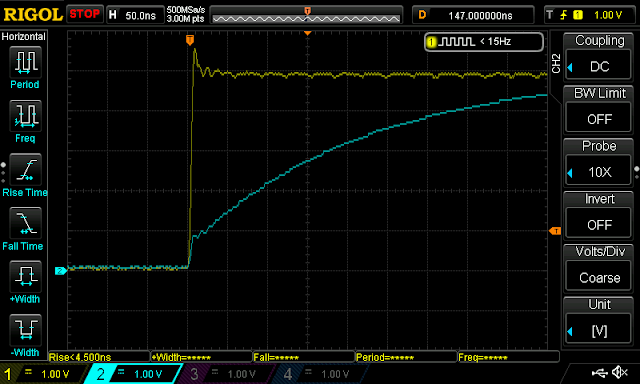 The resistor, when combined with the parasitic capacitance of the RCLK input forms an RC circuit which delays the clock pulse.  If this delay is at least 19ns, then the outputs will be automatically updated (almost) instantly after data is clocked in, just like it is on the 74164.  The input high level for the '595 is 0.7 times the supply voltage.  The RC time constant is based on the time to charge (or discharge) by 63%, so after adding a bit to go to 70% and a safety margin for slower operation down to 3.3V, R*C should be at least 50ns.  The datasheet says the pin capacitance is typically 3pF, and a maximum of 10pF, so something in the 10-15K Ohm would probably work.  The first resistor I tried was 11.3K, and the scope trace above shows the rise time on RCKL in blue compared to SRCLK in yellow.  The delay to 3.5V is around 250ns, and based on the 200ns delay to reach 3.15V (63%), the total capacitance is about 18pF.  Subtracting the 13pF capacitance of my scope probe leaves a total of 5pF for the pin and resistor parasitic capacitance.  The net 5pF capacitance with a 11.3K would mean RCLK reaching 3.5V around 70ns after SRLK.

With this simple modification you can turn a 74HC595 into a 74HC164, and avoid having to stock your parts bin with both kinds of chips.  Since the RCLK and SRCLK pins are adjacent to one another, a surface mount chip resistor could be soldered between the pins if you want the modification to be permanent.  I did something similar with on-chip decoupling capacitors.  SMD 0805 parts work fine with the 0.1" (2.54mm) DIP spacing, and 0603 will just work with 1.27mm SOP pin spacing.  Although 0402 would be a more ideal fit for 1.27mm SOP, soldering those tiny 0402 parts is not something you'll see me doing!

Posted by Ralph Doncaster at 11:49 AM