Parasitic capacitance of MCU pins is not something I've seen discussed much.  Look in the electrical characteristics of an AVR datasheet, and you can find input current leakage, but not parasitic capacitance.  Over a year ago I did some experiments to see how long a floating pin would stay high after switching from output high to input mode.  The result, which is a factor of both leakage and capacitance, was in the tens of seconds.  Now that I have a Rigol 1054Z, I can do some tests to try to specifically measure the input capacitance. 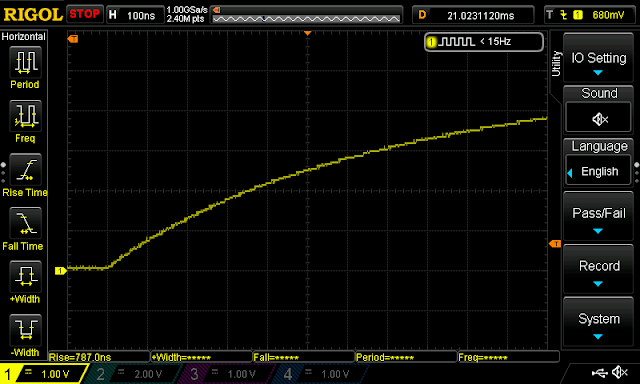 The above screen shot shows the rise time of an unconnected pin on a Pro Mini with the internal 35K pullup enabled.  The Pro Mini has female headers attached (much like the full-size Arduino), and running some simple code that toggled the pullups for PORTB. 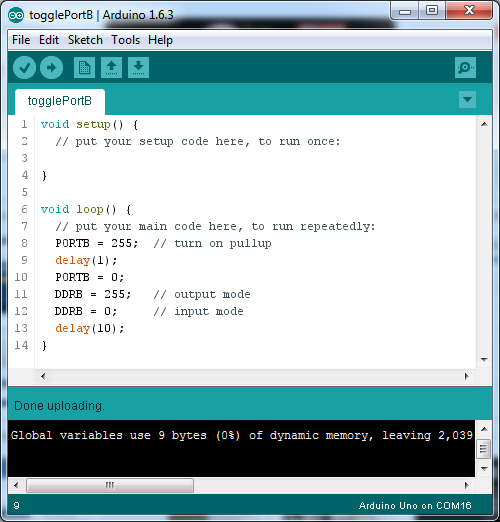 The RC time constant means that a capacitor will charge to 63% in R*C seconds.  So a 1 Farad capacitor charging through a 1 Ohm resistor will take 1 second to charge to 63% of the input voltage.  I'm running the Pro Mini at 5V, so 63% of that is 3.15V.  The Pro Mini pin takes ~700ns to reach just over 3V.  Knowing that the internal pullup on the AVR is 35K, we start with 35K * C = 700ns, and solve for C to come up with 20pF.  I've read that 10pF is a typical value for IC pins, so something probably isn't right with my 20pF measurement.  After a bit more searching through datasheets I found table 29-19 of the ATmega328p datasheet, in the TWI section, which says 10pF max.

I tested an Arduino Nano compatible board with no headers attached that used a QFP ATmega328p instead of the QFN chip used on the Pro Mini.  The measurements equate to a parasitic capacitance of about 25pF.  A second Pro Mini with male headers measured at 20pF, indistinguishable from the first Pro Mini.

After a bit of pondering, I realized my scope probe is going to have some capacitance, and after digging out the spec sheet for the Rigol RP2200 probes, I found a specification of 17 +- 5pF.  So it seems most of the 20pF capacitance I measured is from my scope probes, but I wasn't sure how much.  My next idea was to test an 11K resistor connected to a pin on the Pro mini which cycled between output high and output low.  Here's the screen shot from the end of the resistor that was left floating: 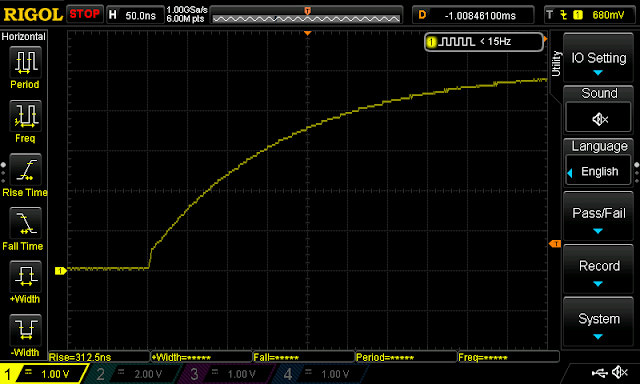 Measuring the 63% rise time and solving for C this time gives 14pF for the capacitance.  This means at least 6pF of the previous 20pF measurement is the parasitc capacitance of the AVR pin.  The measured 14pF consists of the probe capacitance plus the parasitic capacitance of the resistor, so there is still the problem of measuring one or the other.  You may notice the sharp 4-5ns rise at the beginning before the rise turns into a steady logarithmic curve.  After seeing it on my first measurement, I repeated it to make sure it wasn't a glitch.  This EDN article explains that resistors are complex components with inductance, capacitance and resistance.  Charging of the small series capacitance of the carbon resistor I used may explain this initial fast rise. 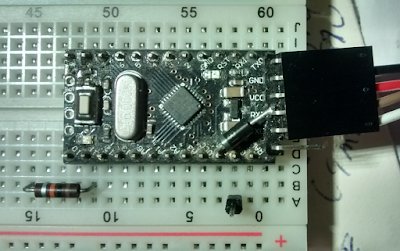 Back to the problem of measuring my scope probe capacitance, I found a pdf document from Keysight that offers the simple solution of attaching two probes and comparing to the measurements from one probe.  I attached two probes, solved for C again, with a result of 27pF this time.  The 13pF increase should be the probe capacitance, with 1pF from the resistor lead.  The EDN article said resistors with 1/4" leads have a capacitance of 1-2pF, so the 1pF measurement from the resistor I used (with 10mm leads) is reasonable.

Posted by Ralph Doncaster at 6:05 PM