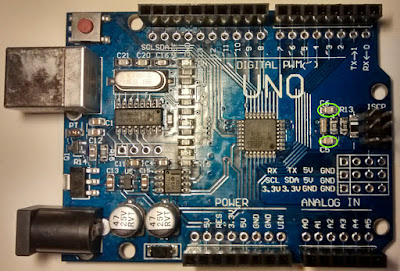 Last month when I saw an Aliexpress listing for a 145c Pro Mini (no longer listed), and it was a version that I hadn't seen before, I quickly ordered it.  The board design has pads for a regulator, although I haven't seen a version of this board for sale with the regulator populated.  I power most of my Pro Mini projects from 5V or even 3V battery power, so the lack of an on-board regulator is not an issue for me.

While waiting for the board to arrive, I reviewed the photo posted by the seller and noticed there doesn't seem to be any decoupling capacitors on the board.  The two small (0603) caps appeared to be connected to the reset button (for the DTR-controlled auto-reset), and to AREF for reducing ADC noise.  So when the board arrived, the first thing I did was probe the connections, confirming that there is no on-board decoupling cap.  The pre-tinned pads for a regulator provided a good spot for a 0.1uF 0805 decoupling cap.  So in addition to soldering the side header pins, I added a decoupling capacitor.

When I powered up the module, the green LED connected to pin 13 (PB5) started flashing every two seconds or so.  The power LED is also green, and almost blindingly bright.  A quick check with my meter revealed the current-limiting resistors for both LEDs were 470 Ohm.  Most of my SMD parts are 0805, but I do have a reel of 15K 0603 resistors.  Changing the resistor for the power LED to 15K changed it to a modest but still clearly visible glow.  Having a 470 Ohm resistor with a low-Vf LED (I measured ~2V) risks attenuating the slew rate of the SPI SCK signal which is the secondary function for PB5.  While I was able to check the fuse settings with a USBasp without problems, I still decided to change the resistor from 470 Ohm to 7.5K Ohm.

Those fuses correspond to a 2K bootloader, 4.3V brown-out detection, and low-power clock 8-16Mhz, slow rising power (65ms from reset).  The clock fuse settings are detailed in table 9-4 of the ATMega328 datasheet (pdf).  I flashed my picobootSTK500 bootloader to free up 1.5K of space for code, and I may also change the brownout fuse bits to 2.7V so I can power it at 3.3V.

Unlike the Baite Pro Mini's I've bought before that have a crystal oscillator, these modules have a SMD ceramic resonator.  While the resonators take up much less board space, they are not as accurate as a crystal oscillator.  The accuracy of crystal oscillators is typically +-20ppm, and ceramic resonators are typically +- 0.5% (5000ppm).  I probed PB6/PB7 of the ATmega with my scope, and measured a frequency of 15.9837Mhz, which is 0.1% slow.  The timing wouldn't be good enough for a clock (it would run about 1.5 minutes slow per day), but it is perfectly adequate for high-speed (115kbps) serial UART or even low-speed (1.5mbps) USB.

While I am satisfied with my purchase, I've noticed that the price for the Baite Pro Minis with the on-board L05 regulator and large MLCC capacitors are now selling for 149c.  Even if I don't use the regulator, I'd spend the extra 4c just for the on-board decoupling caps.  The latest Baite boards also use > 1K Ohm resistors for the LEDs.

Posted by Ralph Doncaster at 7:59 PM No comments: 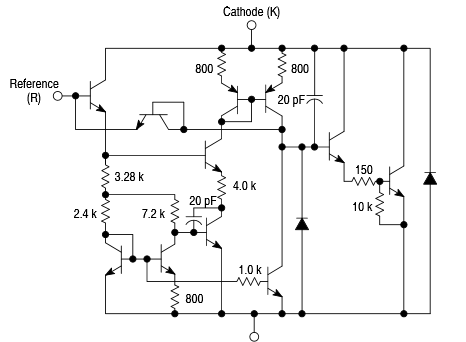 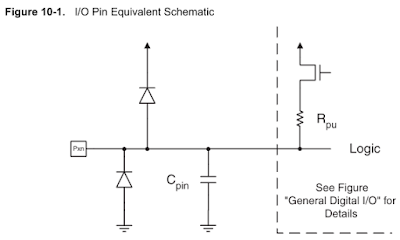