Busting up a breadboard

A few months ago I bought 10 mini breadboards for prototyping small electronics projects. I've noticed lots of other projects using these boards as well.  In the past couple weeks I've encountered strange problems with voltage drops and transient signal fluctuations, which I initially thought were problems with my circuits.  Eventually I started suspecting the breadboards.

One of the first things I did was measure resistance between pins that were connected by a 24AWG copper jumper wire.  The resistance of the jumper wire is no more than 0.1Ohms, but to my surprise I found the resistance from pin to pin was 6.4Ohms.  In case a bit of corrosion possibly reducing the conductance, I unplugged and plugged the jumper wire and pins a couple times.  I even tried putting some acid flux on the pins and jumper wire, but could not get a significant change in resistance.  Just from one end of a strip to the other (5 contact points) I was measuring as low as 0.4Ohms to as much as 2.1Ohms.

Most leads and connectors are made from copper, with tin or gold plating.  Copper conducts very well, but oxidizes easily so tin or gold is used to protect the copper from corrosion.  For the past number of years, the cost of copper has averaged over $3/lb, while stainless steel is about half the price.  While stainless steel resists corrosion, it's resistance is about 40 times higher than copper.  Since a breadboard with poor conductivity has limited usefulness, I decided to break apart one of the worst ones in the batch using a pair of wire cutters.

I pulled out one of the metal contact strips, and bent apart the fingers.  It certainly felt less malleable than copper.  I tried scraping the surface and snipped one of the fingers off, and the metal looked homogeneous.  Most kitchen cutlery is made of stainless steel, and if you or your friends have ever done hot knives, you probably noticed the discoloration caused by heating.  I took one of the metal strips outside and heated it with a propane torch.  Here's the result: 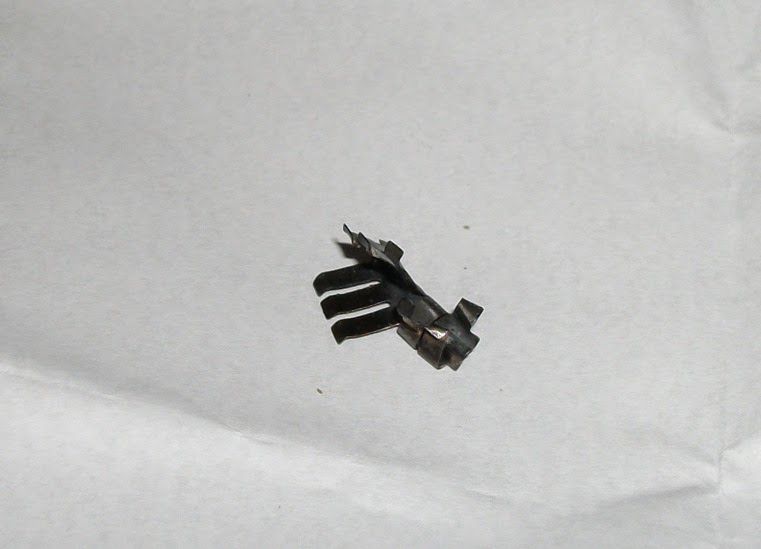 Another possibility besides stainless steel is nickel plated phosphor bronze, like these mini breadboards sold by dipmicro.  Phosphor bronze is close to copper color, and since the core of the metal looks the same as the outside, so I suspect the ones I received are not phosphor bronze.  It conducts about 3 times better than stainless steel so this may be one of those situations where paying a bit more is worth the money...

Posted by Ralph Doncaster at 2:20 PM