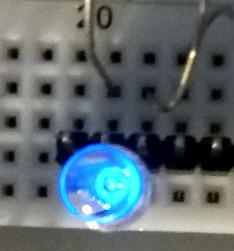 Anyone reading this blog has likely noticed how LED efficiency has significantly improved in the last decade.  If you follow the old rule-of-thumb and use a 330-Ohm series resistor to power a modern LED from a 5V supply, looking directly at the LED will leave a dot floating in your vision for a few minutes like a camera flash.  Series resistors for 0603 SMD LEDs like those on the Baite Pro Mini board are often around 1K-Ohm, and even then I find them too bright.  Even when powered through a MCUs ~40K-Ohm pull-up resistor, I find LEDs clearly visible.  This got me wondering, how low can you go?

I started with a cheap (<$2 for a bag of 100) 5mm blue LED with a 470K resistor, powered from a 3.3V supply.  The room was lit with 2 800 lumen CFL bulbs, and the LED was still clearly visible.  The voltage across the resistor (measured with a meter that has 10M input impedance) was 856mV, so solving for I in V=IR means that the current was only 1.8uA.  The next step was to try 2 470K resistors, and although it was dim, it was still clearly visible, especially when looking directly into the LED.  In the photo above the LED looks brighter than it does with the naked eye due to the light sensitivity of the camera being different than the human eye. 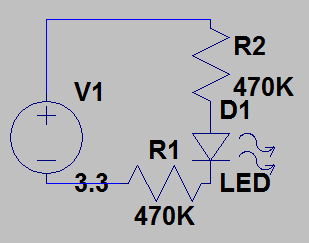 The largest resistors I have in my collection are 1M-Ohm, and I really wanted to try at least 4.7M-Ohm.  Without an obvious solution, I put my breadboard away in a drawer for a few days.  My inspiration came when I thought of my TL431A voltage references.  With a 270Ohm resistor and a TL431 I made a simple low-current 2.5V supply.  With the 2.5V supply and a 470K series resistor, the LED was still visible!  The current through the LED was about 0.2uA, and the voltage drop across the LED, which normally is around 3V with 20mA of current, was slightly above 2.3V.  I found that the LED was brighter when I didn't look directly at it, which is to be expected with dim objects since the most light sensitive cells in our retina (the rods) are located outside the center of our vision.  After adding the 2nd 470K resistor back into the circuit, with just 144nA of current, the LED was still faintly perceptible.

Rather than digging out the 1M resistors, I grabbed a 1n4148 diode and connected it in place of one of the 470K resistors.  If you didn't read my diodes, diodes everywhere post, you might think a 1n4148 would drop about 0.6V from the supply, leaving too little to light the LED.  But with all diodes, the lower the current, the lower the voltage drop.  With the 1n4148 and a single 470K resistor, the blue LED was no long obviously visible (sometimes I thought I noticed some blue out of the corner of my eye), and the voltage drop across the 1n4148 was just 157mV.  The current through the LED now 103nA.  With my camera pointed directly at the LED and the room lights still on, I could still clearly see blue light.  To be sure I cycled the power on the circuit a few times, and the blue light came on and off as expected.

Since even lithium coin cell batteries that you might use for a low-power project have an internall leakage current in the hundreds of nano-amperes, I had reached the end of the practical application of the experiment.  But like any good hacker (hat tip to Jamie and Adam), I wanted to see how far I could take the experiment.  A human is able to detect when a few dozen photons enter their dark-adjusted eye.  The next step was pretty simple; turn off the lights.

Once I turned off the lights, the blue LED was again visible.  My next step was adding the 1n4148 back into the circuit, along with the 2 470K resistors(after turning the room lights back on).  At this point the current was only 17nA, and I was questioning whether I would be able to see anything, even after my eyes adjusted to the dark.  I turned out the lights and went to bed.

While in bed I wondered how much light, quantitatively, was being emitted by the LED.  The light is the result of electromagnetic waves emitted by atoms in the LED gets stimulated by an electron.  Super-high efficiency LEDs can supposedly emit 1 quantum of light (i.e. a photon) per 3 electrons.  My cheap LEDs are nowhere near as efficient, perhaps emitting 1 quantum of light for every 300 electrons.  Dust off the old physics texts, and you can figure out that 100nA of current is about 600 billion electrons per second, and 17nA is a bit more than 100 billion electrons per second.  The chance of seeing light at 17nA was seeming more likely.

After about 10 minutes in bed letting my eyes adjust to the dark, I got up to look at the test circuit.  With only the faint green glow of the ethernet link lights from my router a couple meters away, I stared at the blue LED.  I thought I could make out a fuzzy ball of light when I got very close (~10cm) away from the LED.  I cycled the power on the circuit a couple times, and sure enough the light came and went.

Getting back to the practical applications of this experiment, think of a wireless sensor running on a CR2032 coin cell.  Using the internal 35K Ohm pull-up on an AVR MCU to power a blue indicator LED will use 10-15uA of current while still making the LED easily visible.  Blinking the led for 100ms out of every 5s will consume an average of just 300nA, while making a useful heartbeat indicator.

Posted by Ralph Doncaster at 2:49 PM