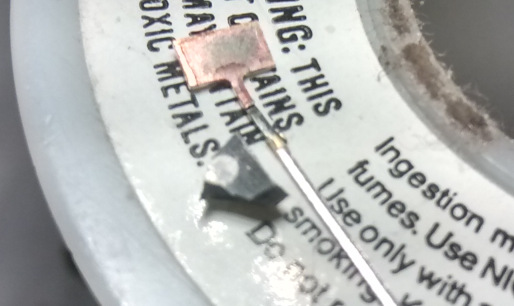 Until a year ago I had never heard of the TL431.  Then I read Ken Shirriff's blog post, as well as other mentions of the TL431 on hackaday.com and eevblog.com.  I found out the 431 is useful not only as a voltage reference, but also as a constant current control, and even a voltage controlled oscillator.

I had started suspecting my cheap (~$20) auto-ranging multimeter was reporting voltages a bit on the high side, and when I found 100 TL431s selling for less than 150c, I ordered them.  While waiting for them to arrive I tried to find out more information about the manufacturer, Wing Shing Computer Components of Hong Kong.   I could not find an active web site (at least in English), and although I found an old datasheet for the WS-TL431, I could not find anything current.  I did find another Aliexpress seller that posted a photo of a box full of WS-TL431A showing a 0.3% accuracy rating, which, considering the low price, is quite good.  Even 1% rated genuine TI TL431 parts are difficult to find for less than 2c each. 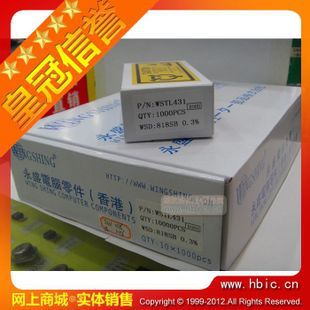 Once I received the package, I checked out the chip markings, which were all the same:
WS
TL431A
155SD

I suspect the 155 is a date code for 2015, 5th week, indicating these are new parts.  The old datasheet from Wing Shing shows the TL431A part as only 1%, and a TL431AA as 0.5%, and nothing listed for a 0.3% part.  I don't think I'm perpetuating an unfair stereotype to say that the Chinese are notorious for bad or non-existent documentation.  I think that the parts I received are actually rated to within 0.3% at 25C, and the manufacturer has not undertaken to produce an updated datasheet (or English website, for that matter).  Other compatible parts such as Linear's LT1431 is rated at a 0.4% initial tolerance, and the  price is in line with similar Chinese TL431 parts such as the ALJ TL431A and the CJ431.  After checking the WS TL431 chip markings, I setup a simple circuit on my breadboard with a 270 Ohm input resistor (which should give about 9.5mA) from a ~5V USB power supply to test the parts. 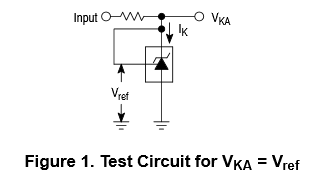 Even with only a quarter of the parts tested, it is evident the voltages are concentrated around 2.510V, 2.512V, and 2.515/2.516V.  While more data points would be helpful, the testing is consistent with fuse-trimmed 0.3% parts. 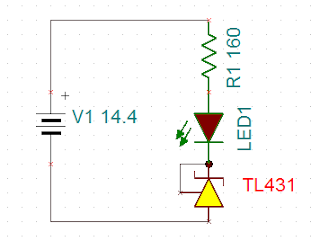 I'd like to have a discharge closer to 0.1C, which would be around 130mA, but the red LED is rated for 50mA maximum continuous current.  The TL431 datasheet has a simple constant current circuit, and by making a couple small modifications to that circuit I think I can make a 130mA constant current discharge circuit with a cut-off voltage just below 5V.

Posted by Ralph Doncaster at 7:46 PM