A 4mbps shiftOut for esp8266/Arduino 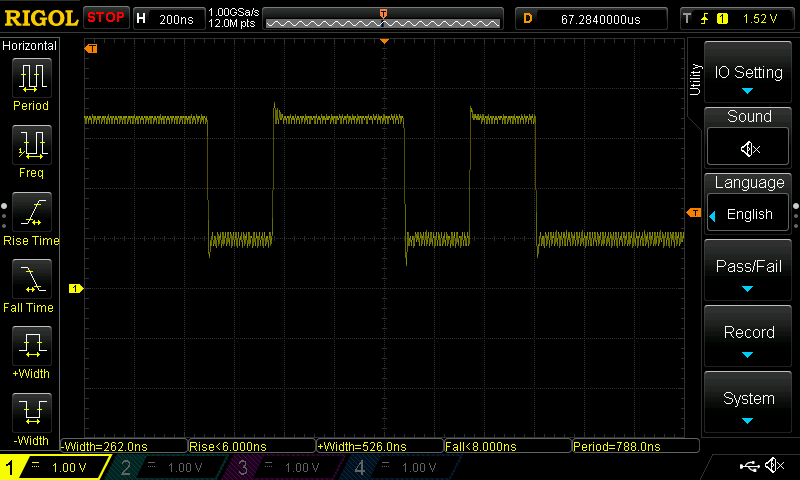 Since I finished writing the fastest possible bit-banged SPI for AVR, I wanted to see how fast the ESP8266 is at bit-banging SPI.  The NodeMCU eLua interpreter I initially tested out on my ESP-01 has little hope of high-performance since it is at best byte-code compiled.  For a simple way to develop C programs for the ESP8266, I decided to use ESP8266/Arduino, using Jeroen's installer for my existing Arduino 1.6.1 installation.  Starting with a basic shiftOut function that worked at around 640kbps, I was able to write an optimized version that is six times faster at almost 4mbps.

Since I don't have a datasheet for the esp8266 that provides instruction timing, and am just starting to learn the lx106 assembler code, I used my oscilloscope to measure the timing of the data line: 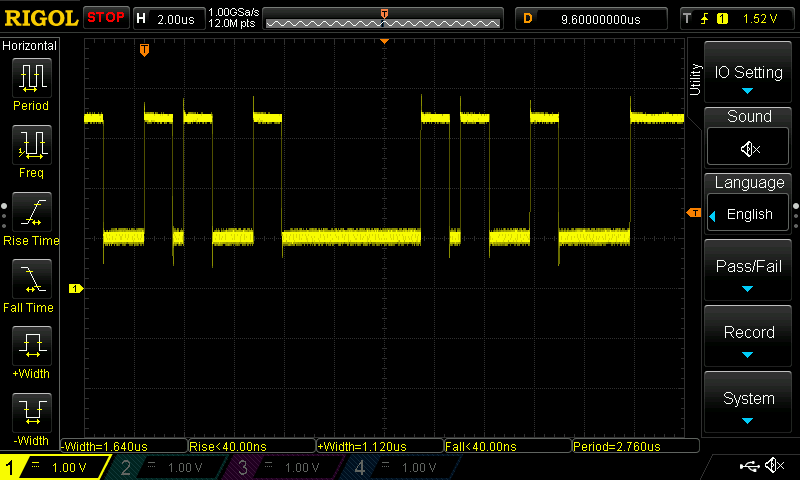 This change increased the speed slightly to 770kbps.  Suspecting the overhead of calling digitalWrite as being a large part of the performance limitations, I looked at the source for the digitalWrite function.  If I could get the compiler to inline the digitalWrite function, I figured it would provide a significant speedup.  From my previous investigation of the performance of digitalWrite, I knew gcc's link-time optimization could do this kind of global inlining.  I enabled lto by adding -flto to the compiler options in platform.txt.  Unfortunately, the xtensa-lx106-elf build of gcc 4.8.2 does not yet support lto.

This modified version was much faster - the oscilloscope screen shot at the beginning of this article shows the performance of shiftOutFast.  One bit time is 262.5ns, for a speed of 3.81mbps.  This would be quite adequate for driving a Nokia 5110 black and white LCD which has a maximum speed of 4mbps.

While 4mbps is fast enough for a low-resolution LCD display or some LEDs controlled by a shift register like the 74595, it's quite slow compared to the 80Mhz clock speed of the esp8266.  Each bit, at 262.5ns is taking 21 clock cycles.  I doubt the esp8266 supports modifying an I/O register in a single cyle like the AVR does, but it should be able to do it in two or three cycles.  While I don't have a proper datasheet for the esp8266, the Xtensa LX data book is a good start.  Combined with disassembling the compiled C, I should be able to further optimize the code, and maybe even figure out how to write the code in lx106 assembler.

Posted by Ralph Doncaster at 4:22 PM